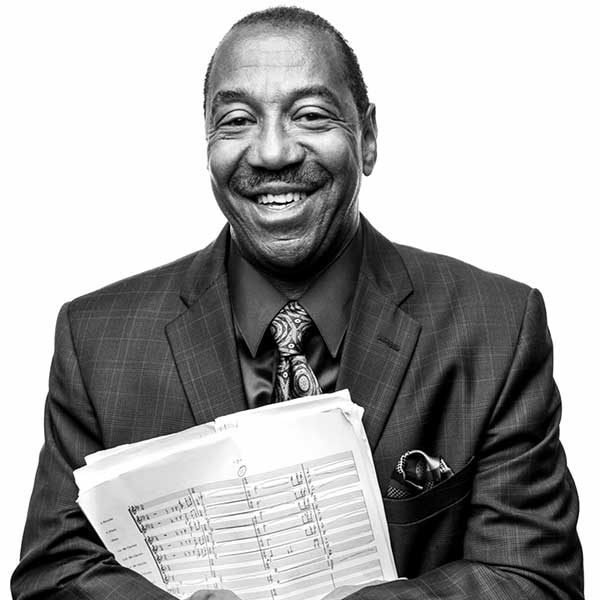 Quincy C. Hilliard’s compositions for wind band are published by a variety of well-known publishers.  In 2014,  Hilliard received the prestigious Mississippi Institute of Arts and Letters Award in the Classical Music Division. He was also recognized with a second Global Music Award for his work as a composer.   In 2012, one of his pieces, Coty (clarinet and piano) was recorded on a CD that was nominated for a Grammy Award. In 2008, he was commissioned by the Library of Congress to compose a work in celebration of the bicentennial of the birth of Abraham Lincoln.  He is frequently commissioned to compose works, including one for the 1996 Olympic Games in Atlanta and a score for a documentary film, The Texas Rangers.  For many years, the American Society of Composers, Authors, and Publishers (ASCAP) has recognized him with annual awards for the unusually frequent performance of his compositions.  Hilliard is regularly invited to conduct, demonstrate effective techniques, and adjudicate festivals throughout the world.

Because Hilliard, the composer, conductor, and educator, is also a scholar of Aaron Copland’s music and life, Copland estate administrators authorized Hilliard to publish the educational performance edition, Copland for Solo Instruments (Boosey and Hawkes, 1999).  To train school band students, he wrote Superior Bands in Sixteen Weeks (FJH Music Company, 2003), Chorales and Rhythmic Etudes for Superior Bands (FJH Music Company, 2004), Scales and Tuning Exercises for Superior Bands (FJH Music Company, 2009), Theory Concepts, Books One and Two and is the co-author of the Skill Builders, Books One and Two (Sounds Spectacular Series, Carl Fischer, 1996).  He is also the co-author of Percussion Time (C.L. Barnhouse Company) which is a collection of music written specifically for the beginning percussion ensemble.  He has presented scholarly papers on music theory and analysis at meetings of the College Music Society and the Central Gulf Society of Music Theory (of which he is past president).  He has published articles in Opera Journal, The Instrumentalist, School Musician, Bandworld, American Music Teacher, Florida Music Director, and Tennessee Musician.

He holds the Ph.D. in music theory and composition from the University of Florida where, in 1999, he was recognized as the Outstanding Alumnus of the School of Music.  He holds the Masters of Music Education from Arkansas State University and the Bachelor of Science in Music Education from Mississippi State University where he was designated College of Education 1998 Alumnus of the Year.  Hilliard’s early music experience was as a trumpet player in the public elementary and high school of his native Starkville, Mississippi.  Dr. Hilliard is also president of Hilliard Music Enterprises, Inc. a personal consulting firm, which has a corporate board of distinguished music educators.

This session will focus on a systematic approach to developing good tone, intonation, technique, and balance is your middle and high school band.

Tone is the first fundamental that should be taught to students. This session will focus on the early fundamentals for developing good tone and breathing habits. Successful drills and techniques will be demonstrated in this workshop.